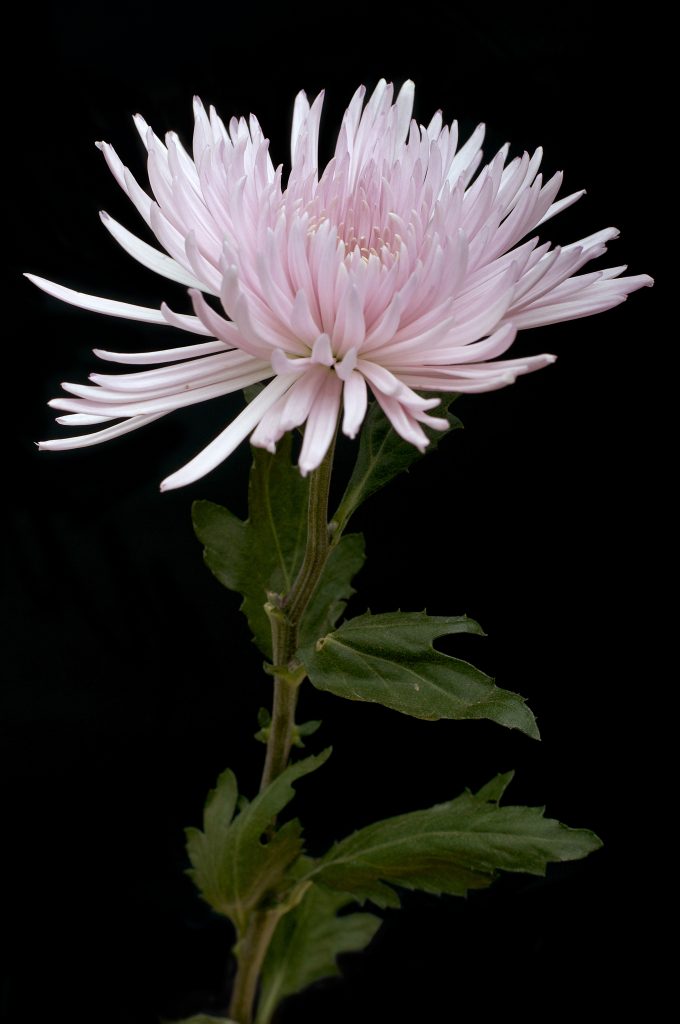 A funky member of the chrysanthemum family, spider mums are known for their unique, spider-looking petals!

“I pinched tendrils of periwinkle at the roots until they hung in long, limp strands, and grabbed a dozen bright white spider mums…The effect was like fireworks, dizzying and grand.”

The Meaning of Spider Mums

Spider mums, named for their long, tubular-shaped petals come in many different colors, and their meaning can vary based on where and when they’re used!

It’s known as a flower for the superstitious. There are many surrounding rituals associated with multiple varieties of mums. In Asia, the mum is a symbol of a long and happy life—while in China, chrysanthemum wine is drunk on the ninth day of the ninth month as a symbol of peace, health, and old age.

In Greek legend, mums are viewed as a protector against evil spirits (which is the reason you’ll often see these blooms in graveyards). But don’t pick them! Tradition states that graveside mums will bring bad luck, headaches, and nightmares to those that choose to pluck them from the ground. [2]

If you’ve ever smelled a spider mum, you’ll know they have quite a unique scent. A little spicy, and a little bit like dirt…but in a good way, of course!

Otherwise, their scent is quite light and not super noticeable. 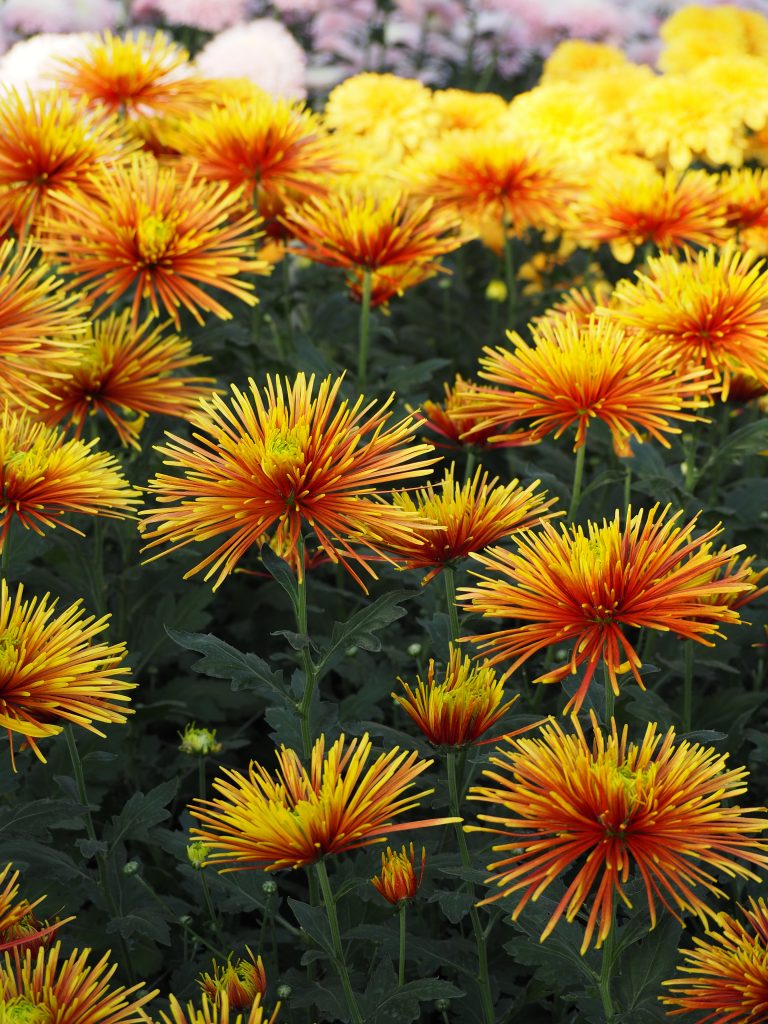 The History of the Spider Mum

Like the common garden mum, spider mums trace their origins back to hybrids of Chrysanthemum indicum, first developed in China over 2000 years ago. Throughout the centuries, these so-called “florist’s chrysanthemums,” have diverged into a vast array of shapes, sizes, and colors. [3]

The mum was discovered in writings as early as the 15th century B.C. Pottery crafted during this time actually shows many varieties of mums, looking much like we know them to look today!

The ancient Chinese name for chrysanthemum is “Chu.” The Chinese city of Chu-Hsien—which means Chrysanthemum City— was named in honor of the great chrysanthemum.

Around the 8th century, the chrysanthemum began putting down roots in Japan. The Japanese were so enamored with the bloom that they adopted it as the crest and official seal of the Emperor. Japan also has a National Chrysanthemum Day called the Festival of Happiness. As if our beloved mums couldn’t get any better!

The chrysanthemum was first introduced to the Western world during the 17th century. In 1753, Karl Linnaeus, a renowned Swedish botanist, combined the Greek words chrysos, meaning gold, with anthemon, meaning flower—and there you have it! Linnaeus was the founder of the branch of taxonomy dealing with plants and including the science of classification and identification. Experts say this is probably an accurate description of the ancient species, as it also points out the mum’s need for sunlight! [6]

How to Grow Spider Mums

Similar to most of the 13 classes of mum, spider mums have been bred and selected mainly for cut flowers rather than for garden use. As a result, they usually can’t tolerate harsh winters. They usually bloom in October (pretty fitting, right?) which often leaves them vulnerable to fall frost and limit their usefulness as annual to regions where frost comes a bit later in the season.

If you’re looking to plant spider mums in your garden, they’re best planted in the spring after the danger of frost has passed.

These funky-looking mums thrive in full to partial sun and fertile, humus-rich soil.

Want to start your spider mums indoors? Go for it!

Young plants that are purchased in late winter or early spring will prosper indoors or out. All you’ll need is a deep pot, a nice sunny window, and water! As your plants begin to bloom, you can cut them back and kept relatively dry and in a cool spot. [3] 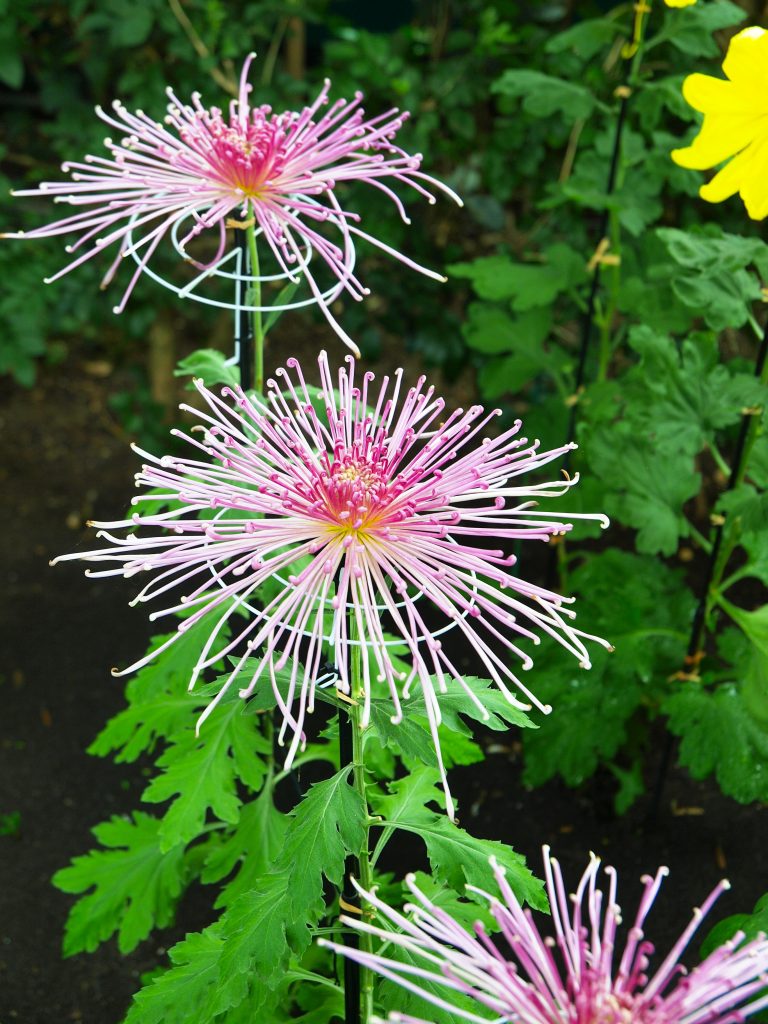 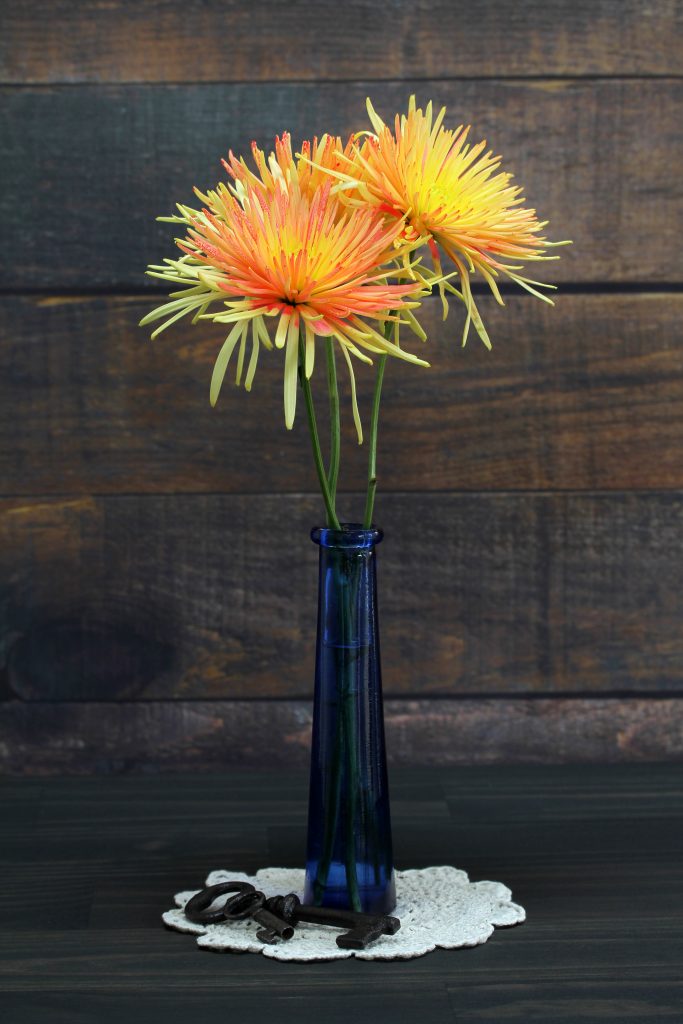 How to Care for Spider Mums

Alright, and now onto how you should care for your freshly cut spiders!

When to Give Spider Mums as a Gift

Spider mums make the perfect gift for a newly engaged or married couple, as well as to express sympathy and to show your love and support for a friend during a difficult time. 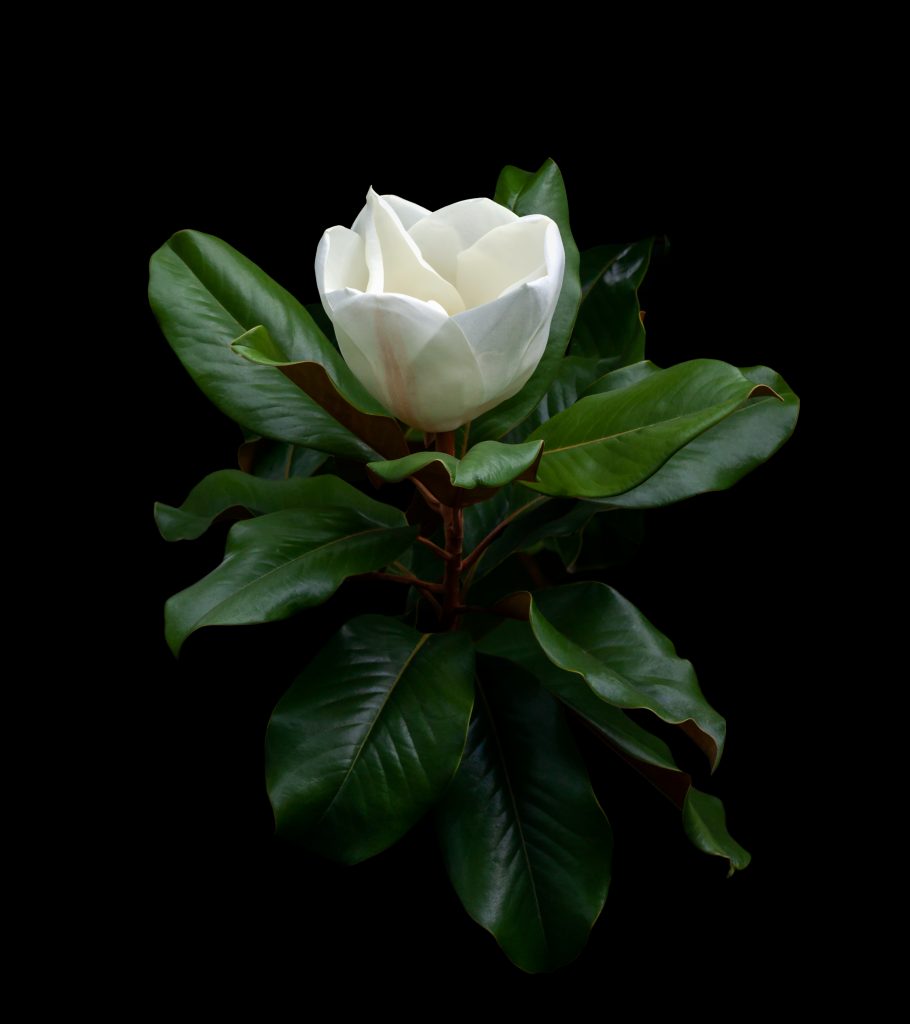 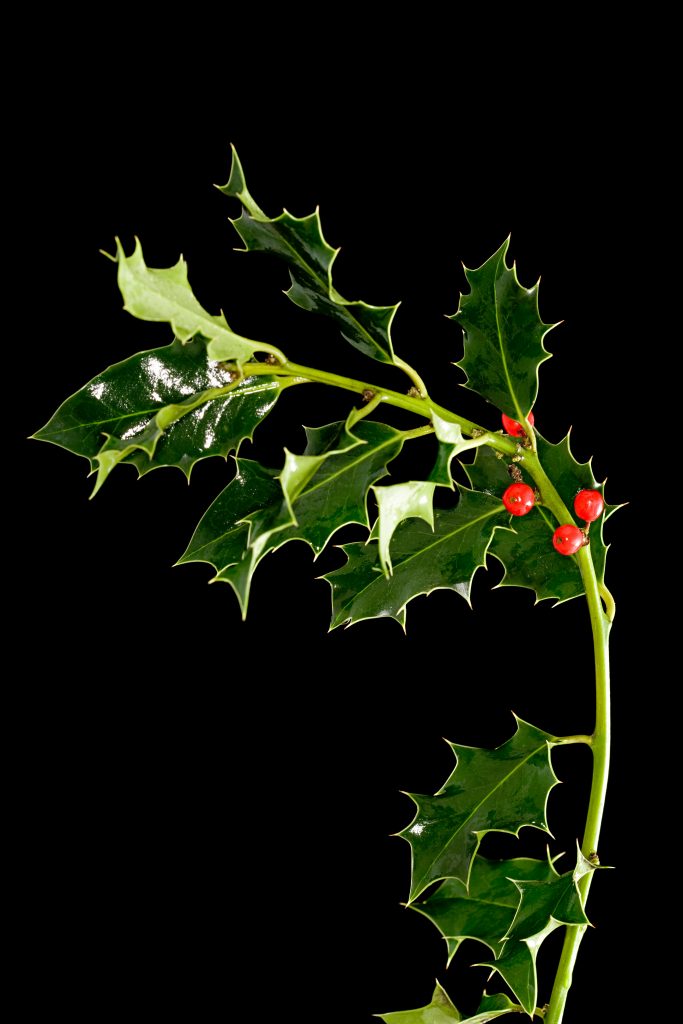 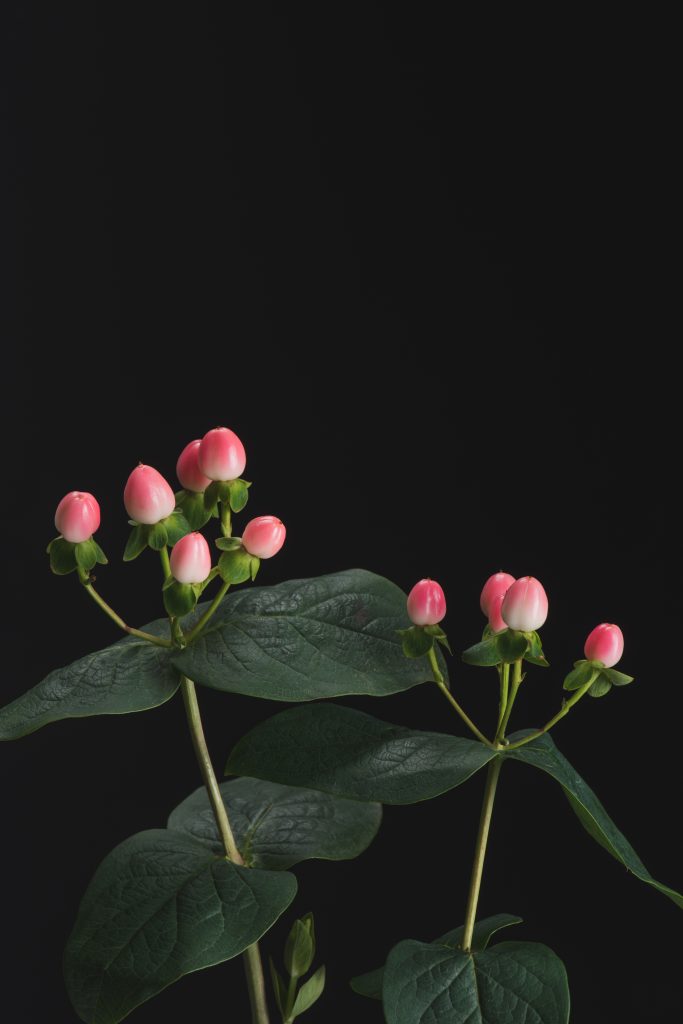