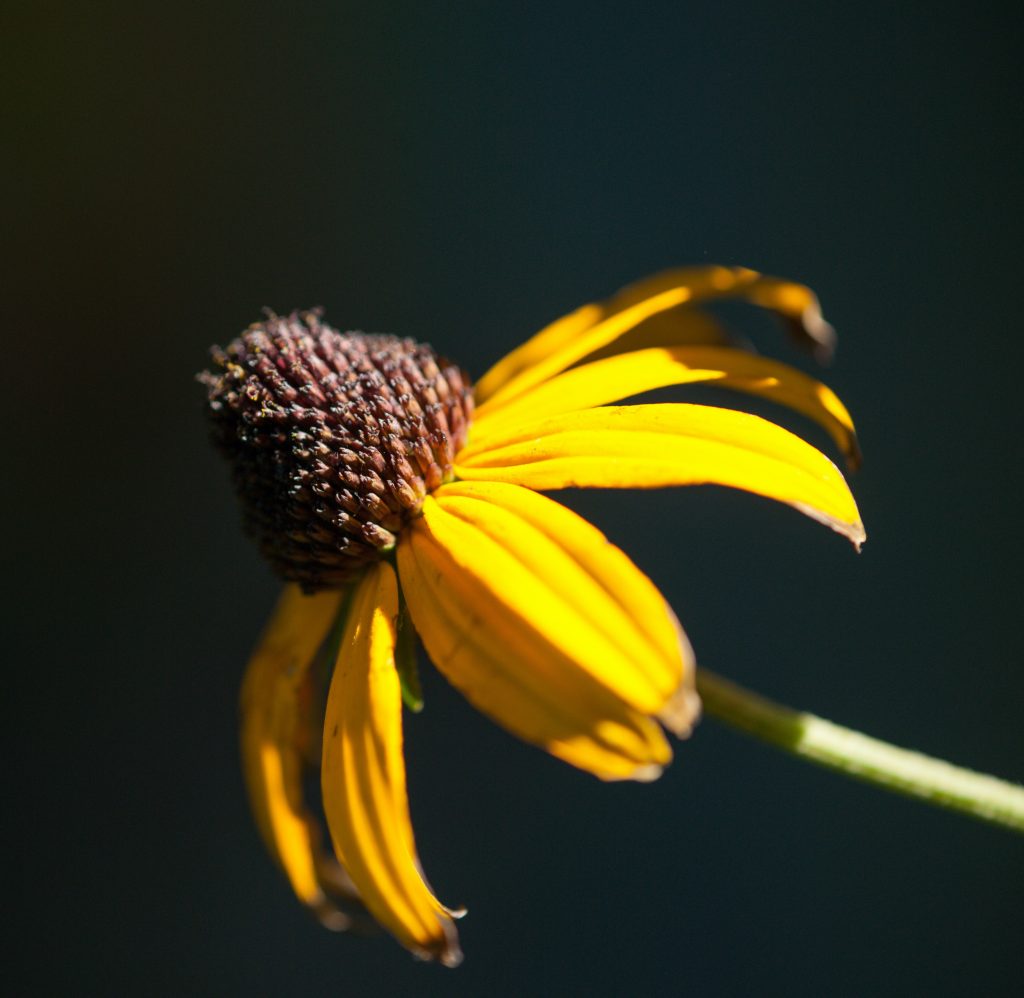 No, not the Black-Eyed Peas! We’re talking about the Black-Eyed Susan! North America’s favorite flower has entered the building! These charming blooms don’t only radiant sunshine; they’re carefree and easy to grow too!

Its seems you grow all over;

In gardens and beside the road

Happy flower, quite the rover.”

The Meaning of Black Eyed Susan

Who is this Black-Eyed Susan of which you speak? She must be of some sort of spectacular significance to be deemed one of America’s favorite wildflowers AND Maryland’s state flower. Like all flowers, there is of course a story behind this one.
As for Miss. Black-Eyed Susan, her’s is a story of grand romanticism.
But first, who was she exactly?
Well, no one truly knows. As legend goes, it all boils down to an Old English poem dating back to the post-Elizabethan era carrying the title, “Black-Eyed Susan,” written by the famous poet John Gay, 1685-1732.

All in the downs, the fleet was moored, Banners waving in the wind. When Black-Eyed Susan came aboard, and eyed the burly men. "Tell me ye sailors, tell me true Does my Sweet William sail with you?"

Little Miss Black-Eyed Susan is obviously looking for her “Sweet William” on board a ship of big, burly men. There are several stanzas throughout the poem in which it is explained that her Sweet William was indeed on board, and quickly made his way down to his dearest love, Black-Eyed Susan for one last farewell.

Though battle call me from thy arms Let not my pretty Susan mourn; Though cannons roar, yet safe from harms William shall to his Dear return. Love turns aside the balls that round me fly Lest precious tears should drop from Susan's eye.

There you have it, dear William is setting off to sea, but promises his love to be safe and return to her.

That’s all very sweet, but it gets better (if you can believe it).

So we’ve got “Sweet William” (a wildflower) and “Black-Eyed Susan” (a wildflower), therefore, we have a real-life love story playing out right before our very eyes every time these wildflowers bloom!

Even better? They look SO beautiful together.

If you seed Sweet William (Dianthus barbatus) with Black-Eyed Susan (Rudbeckia hirta), they’ll bloom for you at the exact same time!

Because both wildflowers are biennials, and the golden hues of the Black-Eyed Susan contrasting with the vibrant reds and purples of Sweet William, together, they create such an alluring sight that’s sure to hit gardeners and flower lovers alike directly in their feels. [1] 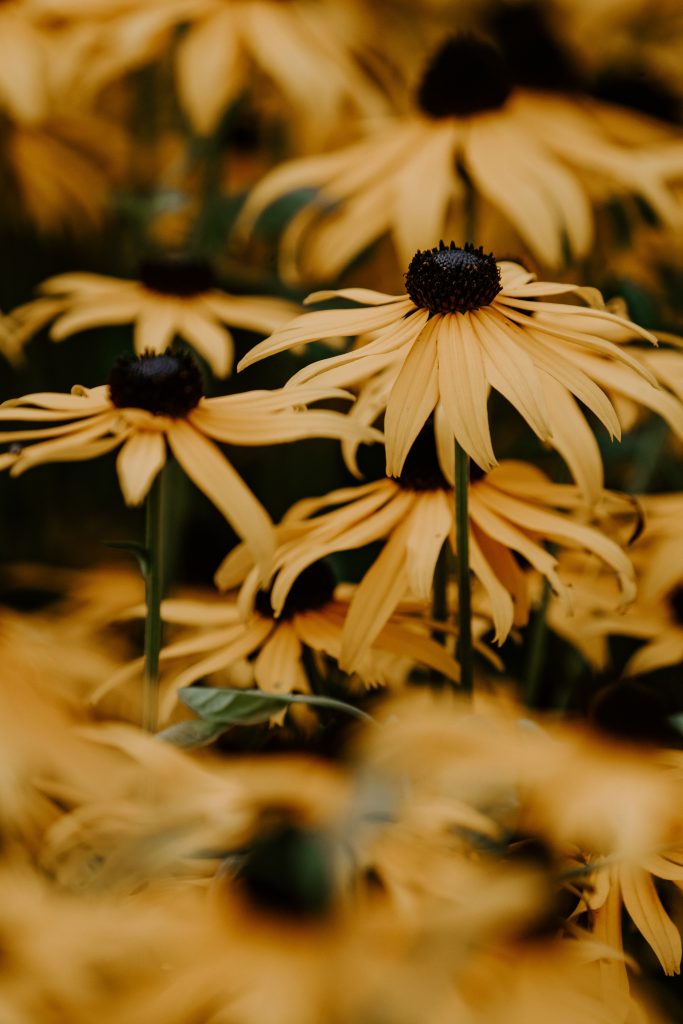 The History of the Black Eyed Susan

Our gal Susan is a North American native, born and raised. The poem of her namesake tells a tale of English colonists who (most likely) have given her her name upon arriving in the New World. However, since almost all of the Black-Eyed Susan species are native to the Great Plains, plant experts have wondered for years how the colonists on the east coast could have given this bloom its name. More recent research in Maryland has unveiled that the plant was actually growing there during the colonial period. So, similar to today, Black-Eyed Susan was probably blooming its way across the continent from the very beginning.

The genus name for Black-Eyed Susan is Rudbeckia, which comes from the Rudbecks. The Rudbecks were a famous Swedish father and son duo, both named Olof. Olof Senior lived from 1630-1702 and was a prized scientist known for his accomplishments in medicine and linguistics, but was also quite learned in music and botany. He also established the first botanical garden in Sweden, originally named Rudbeck’s Garden.

His son, Olof, lived from 1660-1740 and continued many of his father’s studies, becoming almost as famous during his time as a scientist and professor. In fact, one of his best-known students was another Swedish scientist named Carolus Linneaus, otherwise known as the man who devised our current plant nomenclature or plant-naming system. It’s really no surprise that Linneaus gave the name “Rudbeckia” to this vital group of plants!

Our dear Susan has truly made her mark on American culture throughout time. Loved dearly by photographers and artists alike, the Black-Eyed Susan can truly do no wrong. They’re beautiful; they’re bright, and …oh yeah, they’re everywhere!

Despite its wildflower nature, it’s somehow managed to shimmy its way up to the spotlight, among other elitist bloom such as lilies, peonies, iris’, and roses.

Louis Comfort Tiffany actually immortalized this common bloom with his ever-famous “Tiffany Lamp,” which is now among the most prized of American antiques.

Unlike many others, the Rudbeckias are not a universal bloom. Every single variety is a North American native, making the Black-Eyed Susan a full-fledged American / Candian wildflower. [1]

Just like echinacea, this flower has been used in traditional herbal medicine. [2]

How to Grow Black Eyed Susan

​Now onto the fun part!

Grab your gardening gloves, and let’s get to work.

Susans will also tolerate a wide range of soil types. If you have sandy soil that tends to dry out quite easily, add a bit of organic matter to help the soil retain some of its moisture. If you have a more luscious, water-retentive soil, definitely sway more towards the Sweet Black-Eyed Susans.

Make sure you have enough space! Black-Eyed Susans should be planted about 18 inches apart from one another.

Seeds: If you are starting from the seed, sprinkle your seeds on top of regular seed starting mix about 6 weeks before the last frost date. Don’t cover the seeds as they need light in order to germinate. Plant your seedlings outdoors after any danger of frost has passed.

Plants: If you’re planting your Susans, once the danger of frost has passed, set your new blooms out as soon as possible, or keep them in a sunny window and well-watered until it is safe to plant outdoors. Remove all existing weeds from your planting site and loosen the soil. Dig a hole a few inches wider than your young plant. Place the plant in the hole, backfill the hole with soil, tamp, and water well! [3] 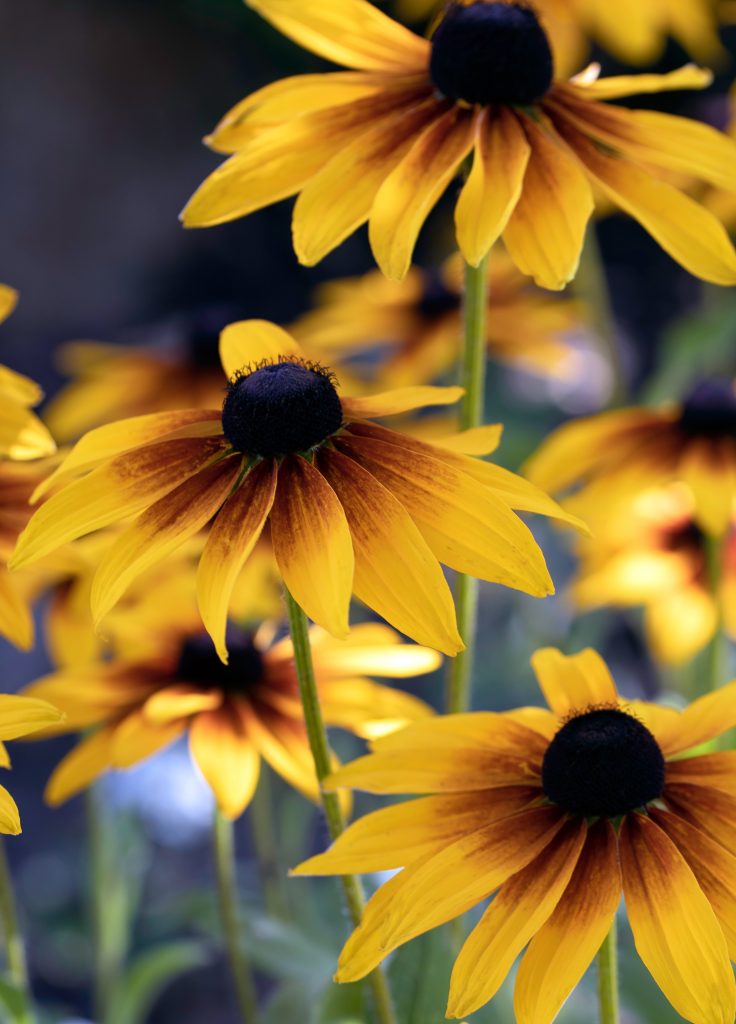 Black Eyed Susans are pioneer plants, one of the first plants to grow after a fire or other natural disaster. [2] 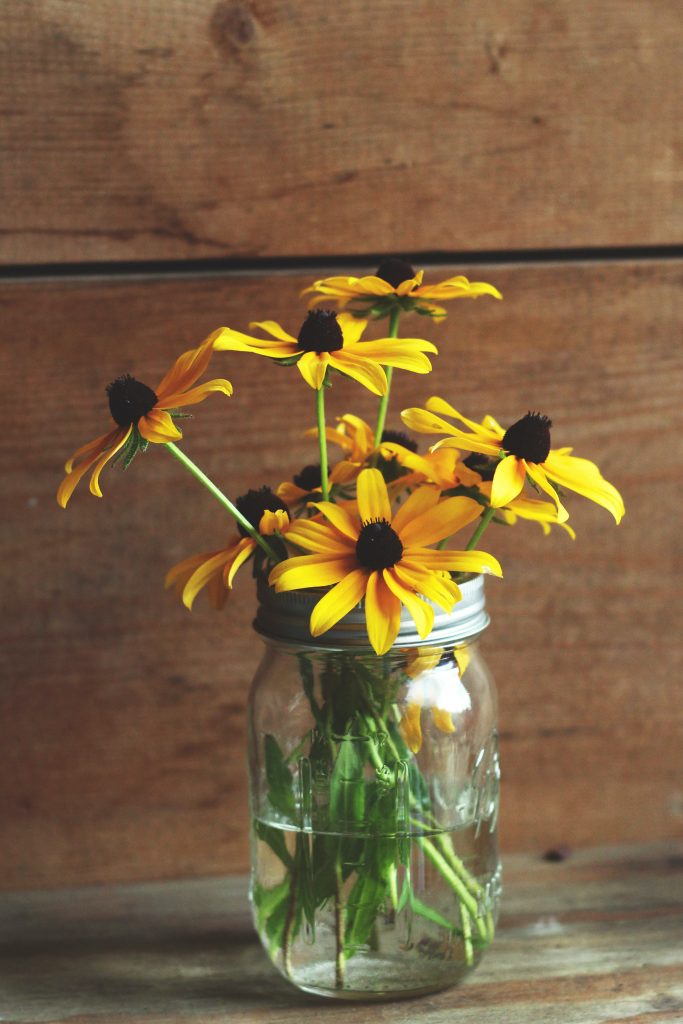 How to Care for Black Eyed Susan

Caring for Black-Eyed Susans is quite simple. They are naturally drought resistant, self-seeding, and will grow in a variety of soils.

However, you may need to deadhead your blooms to encourage more blooms and a sturdier plant. It can also help prevent the spreading of the blossoms as its seeds live within the flower itself. Seeds can dry on the stem for reseeding or be collected and dried in other ways for replanting. [4]

If you’re planning on cutting your Black-Eyed Susan to use indoors, they should last you about a week or even longer if cared for properly after cutting!

Be sure to use your sharpest clippers to avoid crushing the stem, as this will minimize the amount of water that is able to travel through. Cut the stems at a sharp angle and place them in water immediately.

When to Send Black Eyed Susan as a Gift 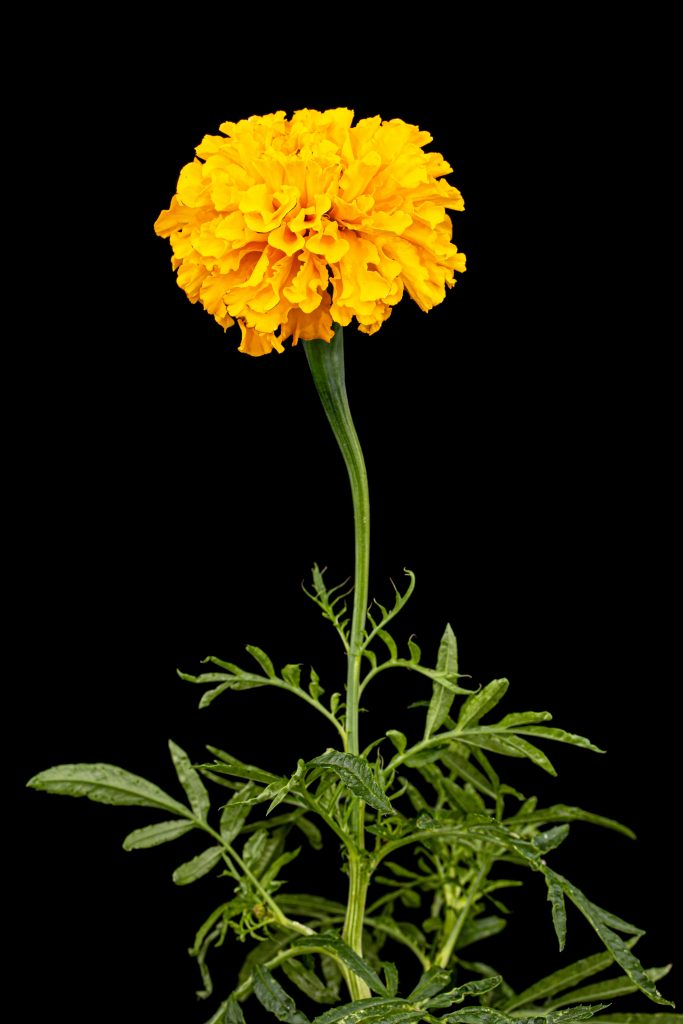 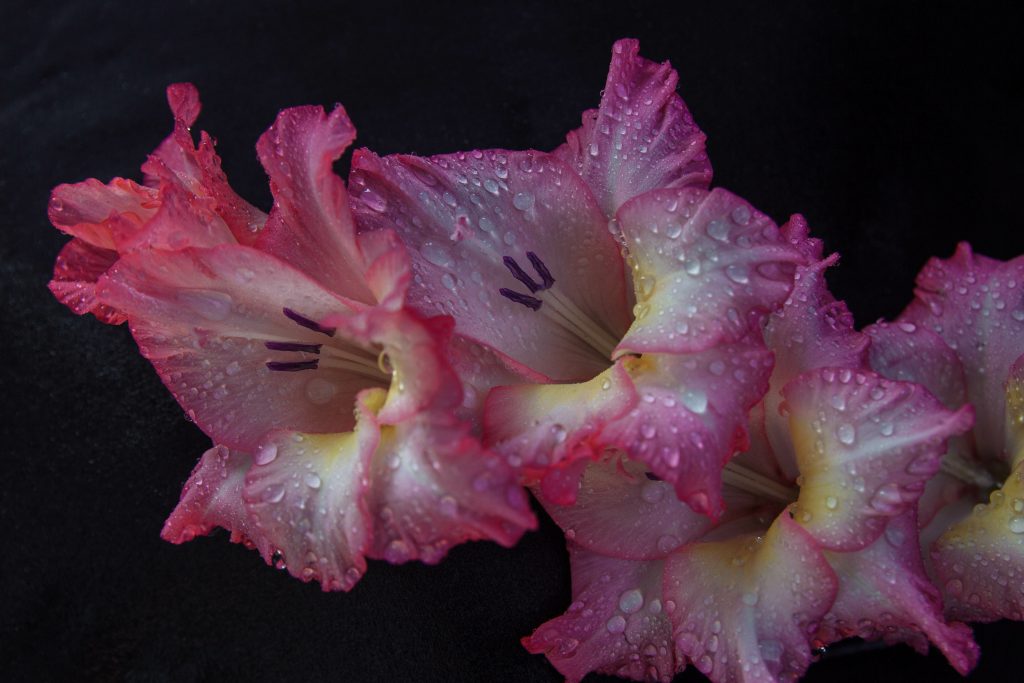