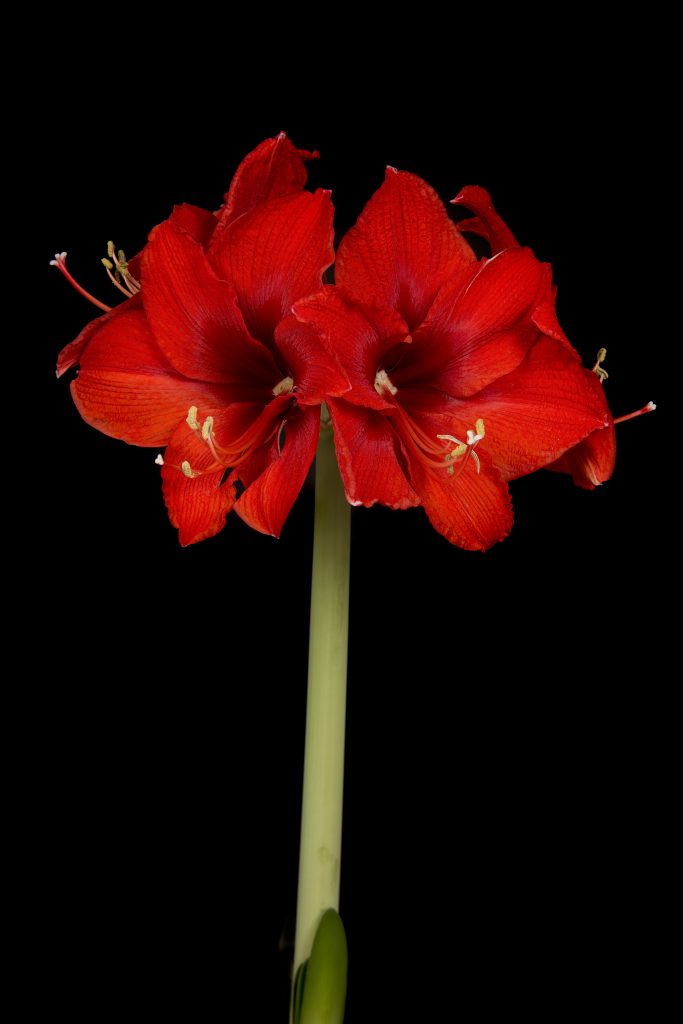 These big beautiful blooms may be a holiday favorite, but they’re actually derived from a group of tropical plants from Central and South America.

“I care not for these ladies, That must be wooed and prayed; Give me kind Amaryllis, The wanton country maid. nature art disdaineth; Her beauty is her own.”

The Meaning of Amaryllis

It probably comes as no surprise that this stunning bloom symbolizes beauty—just look at it! Amaryllis is the perfect bloom to give to someone you find beautiful, inside and out.

Pride: Victorians considered these blooms to be symbols of pride, particularly in terms of vanity. Some even used amaryllis to make others angry, almost as a sort of insult. But you could also gift these flowers as a joke to someone who is overly conscious of their appearance.

Attention: Again, this one’s pretty self-explanatory. This gorgeous bloom is going to be the center of attention whether you want it to or not. It’s sure to make the perfect eye candy for your home or in a bouquet sent to a loved one. Amaryllis has been catching eyes and stealing hearts for centuries.

The amaryllis is also often used as a symbol of unreturned or unrequited love. There’s even a poem written by the Greek poet Virgil about a Greek nymph called Amarullis who died in vain after going unnoticed by the love of her life. [1]

There are many flowers that have just one meaning, but the tulip has many meanings depending on its color… and it has a lot of color varieties. Here are just a few different colors and what their amaryllis color meaning is: 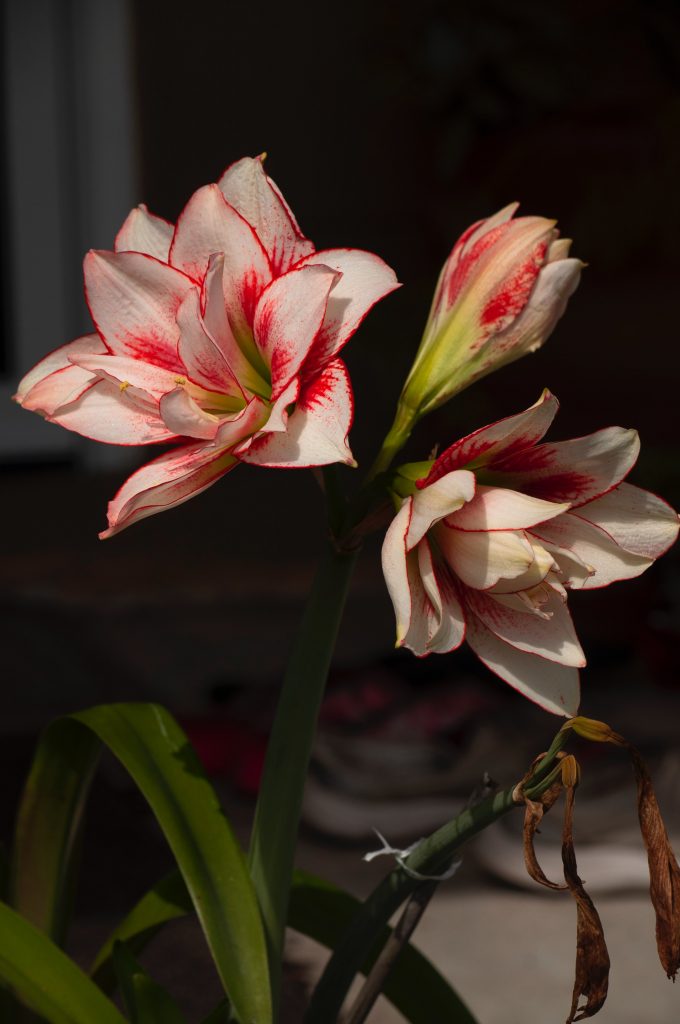 The History of the Amaryllis

Some botanists believe that the Portuguese probably brought the bulb of the amaryllis to Europe around the early 16th century. Portugal, Spain, and Italy were among the first European countries to introduce the amaryllis belladonna, as explorers from these countries would return home with tons of new discoveries in an effort to please the wealthy patrons who paid for their world-wide expeditions. The discovery of amaryllis belladonna in places like the Canary Islands and Madeira theorizes that its importation may have paralleled the history of the sugar cane trade as well as the slave trade. Amaryllis belladonna arrived in England around the early 18th century.

The genus name “Amaryllis” comes from the Greek word “amarysso,” which means “to sparkle.” In Greek mythology, it was the name of a shepherdess who shed her own blood to prove her true love, and in doing so inspired the name of this lovely bloom.

Throughout the 18th century, amaryllis bulbs were actually labeled as lilies, which explains many of their common names today. In South Africa, it is known as the March lily; in the United Kingdom, it’s the belladonna lily or the Jersey lily; and in Italy, it’s known as the Madonna lily. The Portuguese name of the amaryllis means “St. Joseph’s Staff” in reference to the legend of the staff of St. Joseph bursting into bloom as a sign of his selection as the spouse of the Virgin Mary.

German botanist Eduard Friedrich Poeppig spent much of his time in Chile where he discovered the amaryllis hippeastrum growing on a hillside during one of his many plant-hunting expeditions in 1828.

In terms of hybridizing, some took place concerning the amaryllis belladonna in Australia during the middle of the 19th century. A cross between Amaryllis belladonna and brunsvigia took place at Campden Park Estate, also known as the home of Sir William Macarthur, an Australian botanist, and viticulturist. Brunsvigia multiflora and amaryllis multiflora were among the hybrid results. Today they go by x Amarygia.

We know, you’re probably wondering about Christmas Amaryllis! Well, Holland is a major grower and exporter of amaryllis, which usually increases in demand around the holiday season due to its festive variety of colors. Dutch and South African varieties include bright red, pink, and white blooms. [2]

In nature, amaryllis bloom in spring or summer, but are commonly forced into early bloom for the holidays. [3]

How to Grow Amaryllis

Growing amaryllis bulbs honestly couldn’t get much easier—we’re in luck!

Step 1: Plant in a 6-8 inch pot if your amaryllis is not already potted. Use a heavy pot if you can, as lightweight pots are more likely to tip over under the weight of the blooms. Plant bulbs pointed-end-up in potting mix and pack the soil gently around the bulb so about one-third of the bulb remains above the soil line.

Step 2: Place your potted amaryllis in a location that receives bright, indirect light.

Step 3: Water sparingly until you see about 2 inches of new growth from that point on, water regularly.

Pro tip: As your amaryllis grows, turn the pot periodically to encourage the flower stalks to grow straight. Flower buds will appear at the top of each stalk, followed by the beautiful blooms you’ve been dreaming of! To prolong the life of your fresh blooms, keep your amaryllis out of direct sunlight. [4] 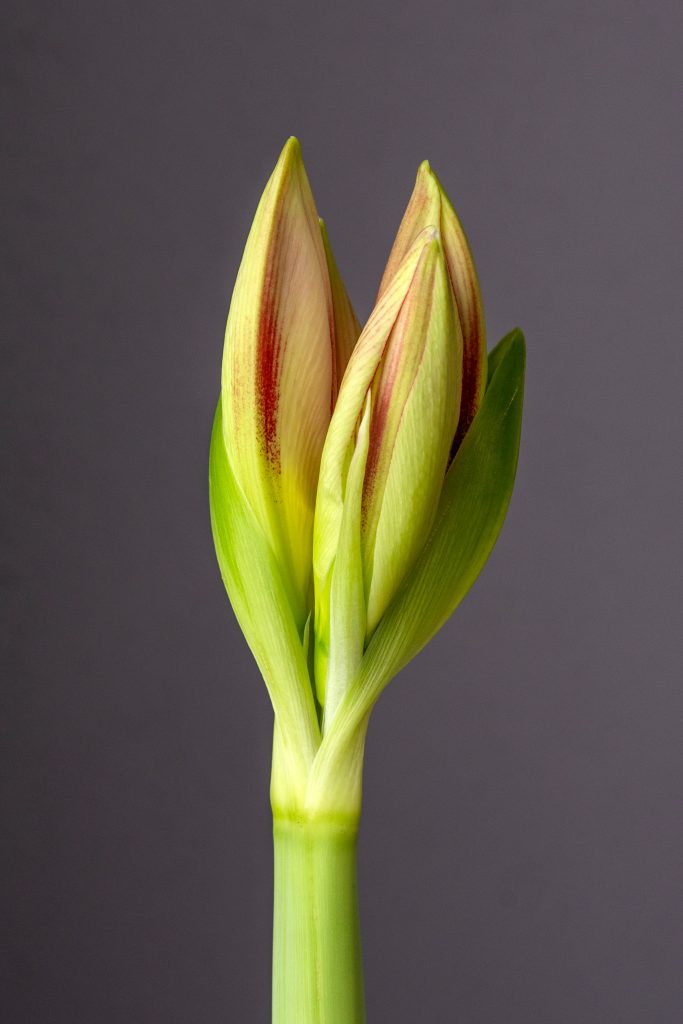 The U.S. imports more than 10 million amaryllis bulbs every year, mainly from Holland and South Africa. [3] 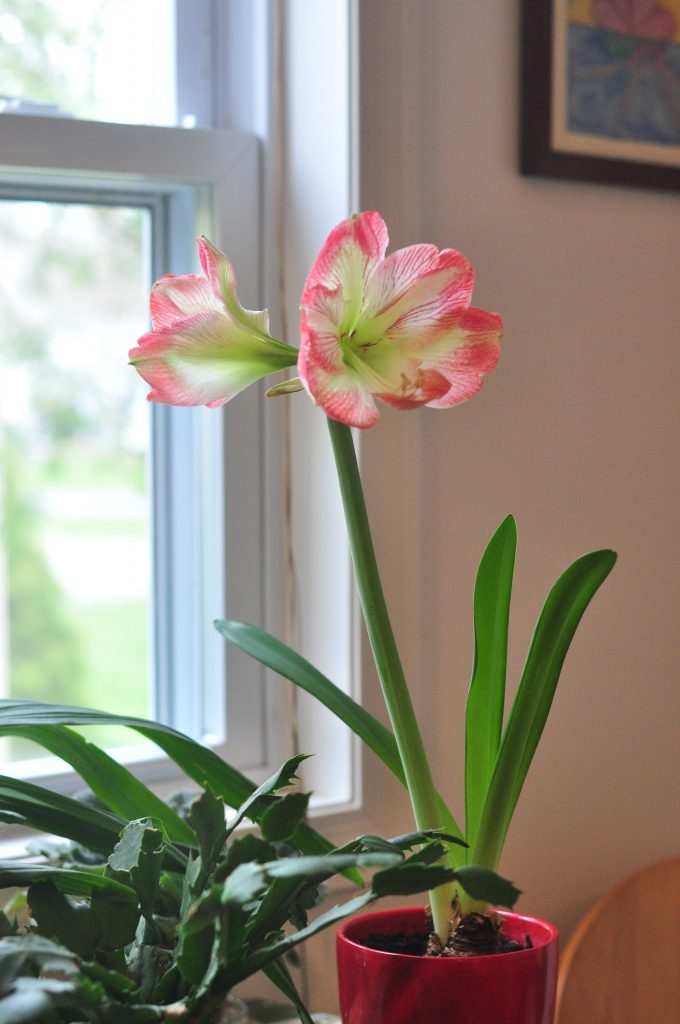 How to Care for Amaryllis

Alright, and now onto how you should care for your freshly cut amaryllis.

Step 1. Cut your amaryllis early in the morning or late in the evening, removing about a half-inch to one inch from the bottom of the stalk.

Step 3: Place your cut flowers in filtered water at a temperature between 100 and 110 degrees Fahrenheit immediately after cutting so that half of the stem is immersed in water. Leave the blooms for 20 minutes.

Step 4: Mix a cut flower preservative with water and fill the container or vase for your blooms.

Step 5: recut the base of the flower stems while holding the bottom of the stem under running water and immediately place it in your container of water and floral preservative.

Step 6: Keep your amaryllis out of direct sunlight and other heat sources or warm drafts.

Pro tip: Be sure to store your cut amaryllis in a cool space at night or whenever it is not in use. This will help extend their life after cutting.

Recut your amaryllis stems every time you change the water and preservative solution. [5]

When to Give Amaryllis as a Gift

Amaryllis makes a perfect holiday gift! They also make a wonderful gift for someone you admire or love deeply.

[6] Funny How Flowers Do That 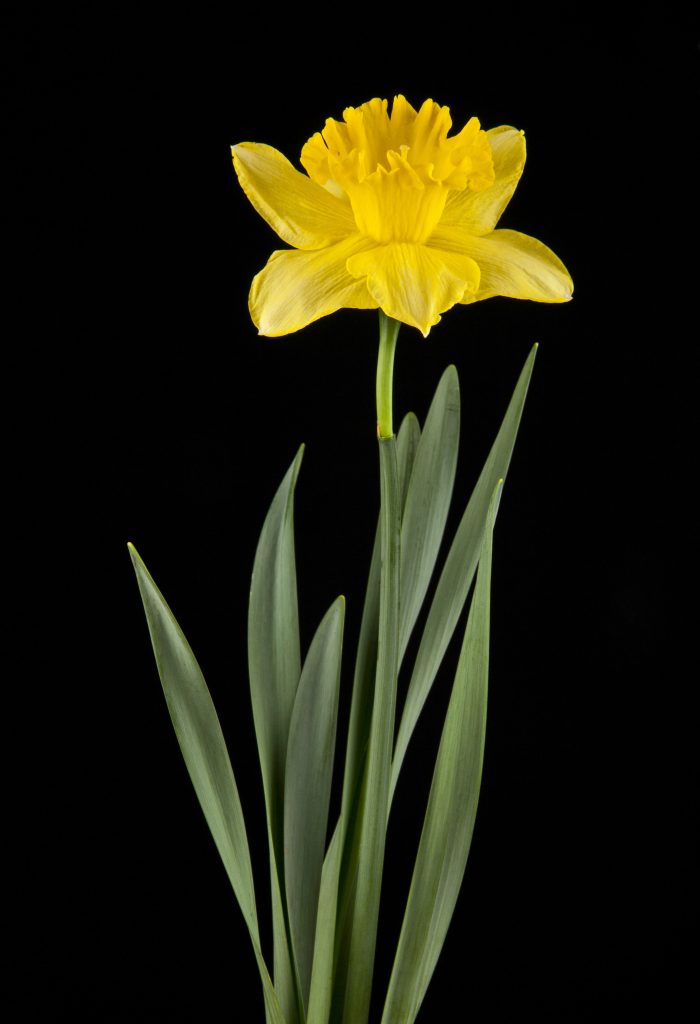 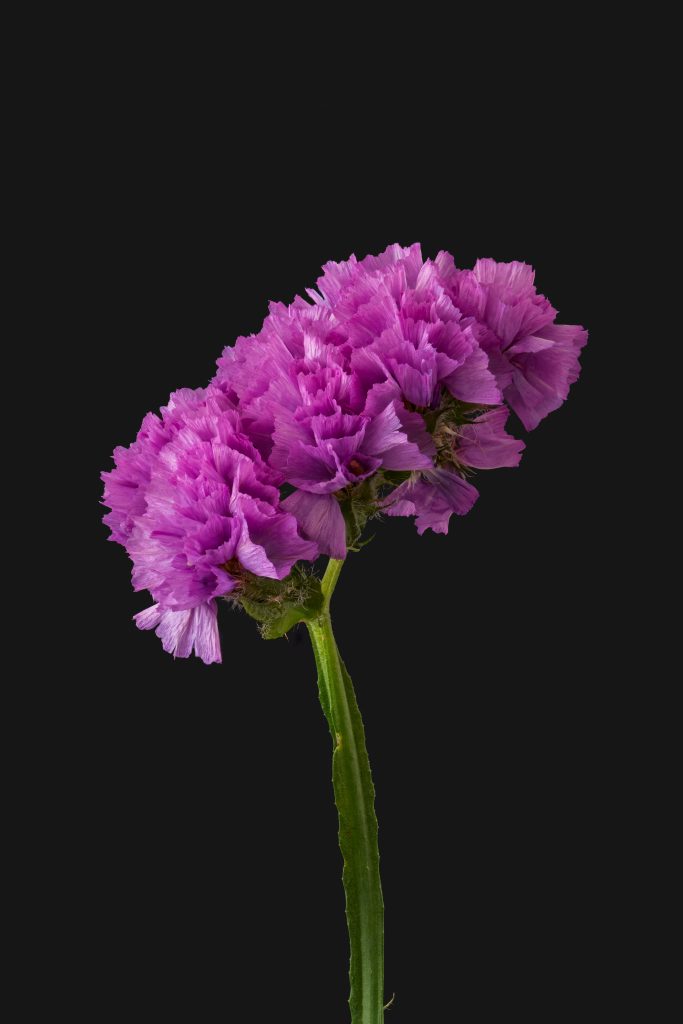 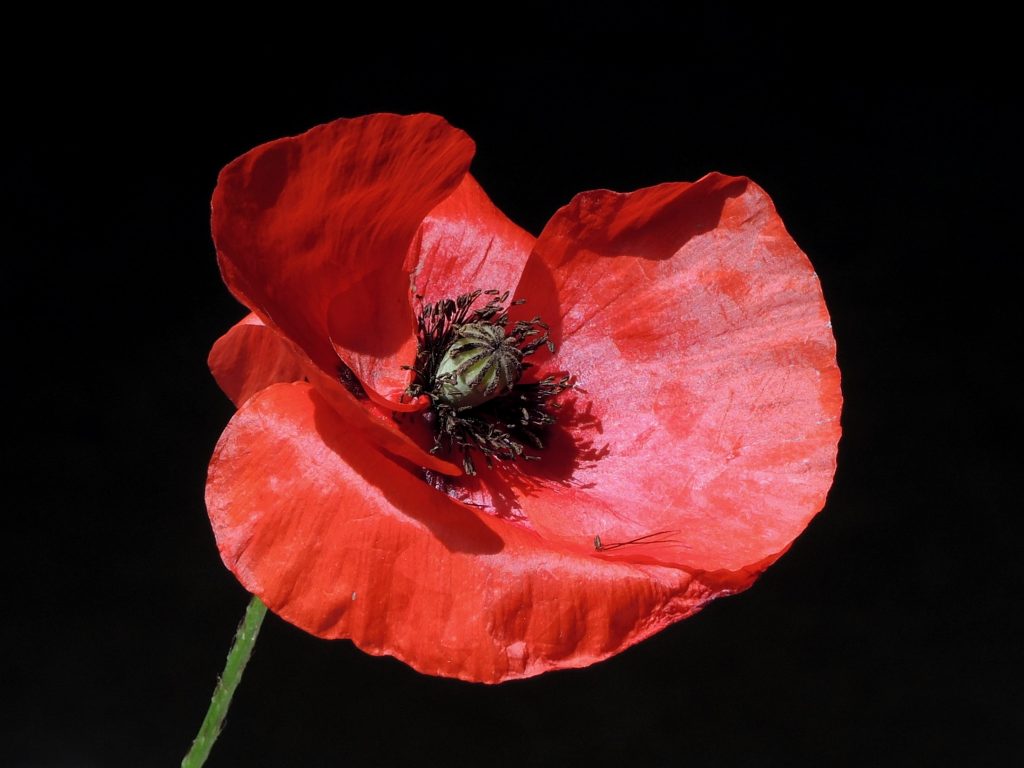